Thanksgiving Calories... Where Are They Now? 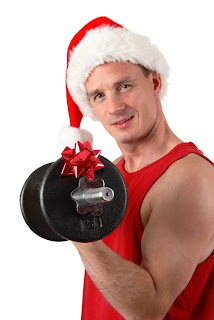 It's universally-accepted knowledge that the average American gains body fat during the holidays, as a result of overconsuming calories.

It is also universally-accepted to know that the overwhelming majority of Americans either do not exercise, or do not exercise with enough intensity or duration to remove the excess body fat.

The extra fat often goes undetected because people don't notice a big enough difference in their own bodies to recognize it. One's bodyweight often remains roughly the same, and clothes don't feel significantly tighter... So, if we're gaining body fat, then why isn't it more obvious?

One reason is that our bodyweights fluctuate throughout the day, often by up to 2%. With this, a gain in body fat of less than one pound, which is a common amount of fat to gain in one holiday season, often goes undetected and gets lost in the mix of daily bodyweight fluctuation.

Clothes can be misleading also, as gained body fat may get distributed rather evenly throughout a body, which makes it more difficult to notice in clothes. On the flipside of that thought, most of the new fat may be stored in one place that would not affect the way clothes feel. For example, additional body fat on the back of the arms may not result in a "tight feeling" against a loose-fitting short-sleeved shirt.

Another reason is that we often lose muscle as we gain body fat, which tends to balance out the scale. While this is not always the case, we should accept and understand that our muscles are atrophying (shrinking) when they aren't being challenged enough or when they aren't getting the right amounts of protein at the right times. With holiday stress, missed workouts, and a general lack of proper amounts of protein, it is a safe assumption that we are not just gaining body fat, but that we are losing muscle as well, which will minimize any change in the total amount of actual bodyweight.

What Can You Do?

First and foremost, commit to more regular moderate-to-high intensity cardiovascular exercise for at least six weeks. As a very broad generalization, just one or two more 30-60 minute workouts per week, in addition to what you already do, should partially or completely remove the additional body fat. Please keep in mind that this is a generalization based on mean values for the average American and will not have personal accuracy.

Secondly, have your body fat percentage (also called "body composition") checked by a PPT professional, and re-check after the holiday season. This should serve as a good indicator as to whether or not your caloric consumption throughout the holidays was having a drastic effect on your body. If it is, as it is with most Americans, then we can determine a plan to create a safe caloric deficit.

The bottom line is that any extra, unneeded calories that you consumed at Thanksgiving (or at any other time) will either remain in your body as fat or will be lost through activity and/or a caloric deficit. They won't magically disappear as their own, as some may hope, but they are well under your control!

Posted by Perfect Personal Training - In Home, Nationwide at 8:09 PM No comments: